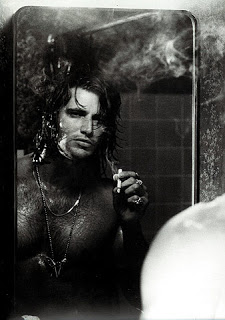 I lived in L.A. when I was a young twenty - something.  I spent a lot of time in clubs around B-List actors (see above photo) and lots of wannabes.  I didn't really fit in, though I was young and cute; everyone around me looked younger and cuter.  When you take a solid New Jersey 7 and put her in L.A., she becomes an automatic 4 1/2.  It's just Los Angeles Hotness Math.

My serious north Jersey accent didn't really help matters.  Though practically everyone out there is transplanted from somewhere else and I met many NJ brothers and sisters, it seemed that most of them lost their back east accents within moments of touching down on Culver City's dusty brown streets.  When I did find someone else who said orange the way GOD!  INTENDED! (Arr-enge), I clung to them like crazy glue and we became lifelong friends (or they blocked me on Facebook years later; whatever).  I love being in a foreign land, but there is nothing like hearing your mother tongue unexpectedly in a crowd of strangers.

I really didn't have the attitude for the City of Angels, either.  Sure, I had the blondish hair, but that was it.  I had (still have) no fashion sense of any kind other than asking myself " Will I get fired for wearing this?"  and then hoping for the best. 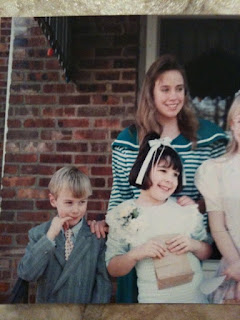 In a particularly cringeworthy moment, I had a potential boss berate me for not wearing pantyhose to an interview.  If I had had some stunning, well cut suit to go with my buffed, tanned and shiny legs, I might have gotten away with it; but, it was winter, I was pale and pasty and wearing a green and white sailor suit.  I repeat:  SAILOR SUIT.  And white Easter shoes;  literal Easter shoes, that I had not worn since 1987.  I realized that I was not in Bergen County anymore and promptly drove to the nearest ROSS store and bought myself a real (if not completely hip) suit which I then had tailored ( a step in the right direction, no?  No.) to be inappropriately short.  At least I wore stockings with it when I finally did land a job.  :)  Remember "Working Girl"?  I was Melanie Griffith before she raided Sigourney Weaver's closet.  Now that I think about it, I probably should have paid more attention the first time I saw that movie and the sailor suit incident may never have happened.  Live and learn.

In more recent memory, a very good friend of mine began singing "Borderline" every time she saw me after catching me at work wearing a cut off the shoulder tee shirt a la Madonna.  It was 2007.  I obviously had no clue that it had been a full thirty years since that had been acceptable.  She still reminds me of this horror anytime I get a bit too full of myself.  Good friends will keep you from being too much of an asshole and hopefully, from ever wearing dayglo pink and black rubber bracelets outside of Halloween.

Email ThisBlogThis!Share to TwitterShare to FacebookShare to Pinterest
Labels: Being 21, Madonna, wannabes