1)  I am a picker.  Dead skin, fingernails, zits, you name it.  I will pick a zit until it is four times the size it was to start with.  Lucky for me I am so good looking that no one ever notices.

2)  I don't deal well with loud places and people.  I love loud music.  My cats are all half deaf from spending time in my bedroom while I am on the treadmill and I have my Paula Abdul/Pantera/Phantom of the Opera mix blaring.  But, over- the- top loud and excited people make me want to hurt them.  In this respect I am really happy that I have all boys and no screeching girls.  I love girls, I am one, but there is a certain decibel level and pitch that when put together make me go to a dark, dark place...


3)  I love going grocery shopping with my boys...today, that is.  When they were little and we had to do the intothecarseatfallasleepoutofthecarseatshopbeforesomeonepoops dance, I hated it.  It was so stressful.  And my kids would embarrass me.  My oldest would answer stranger's questions with either a blank stare, or a weird question of his own.  Oh, wait, he still does that.  My middle started hiding as soon as he was able to walk and would remain perfectly silent ( a feat he is unable to achieve at any other time ) until I found him, usually just before I collapsed on the floor into a hilarious nervous breakdown.  Oh, wait, he still does that. My youngest would just pretend he didn't hear someone talking to him and would look away until they gave up.  You guessed it, he still does that.  Autism is fun.

I find it ironic and sad that Charles (who has Down syndrome) is super social and wants to talk to people and yet people usually only want to talk to my "typical" looking younger and older sons, whom both would rather chew off their own lips than talk to a stranger.  Nowadays, I just don't care what other people think about their behavior.  I  just enjoy the fact that my big boys still want to spend time with me.

4)  I have been having a somewhat one-sided love affair with Daniel Day Lewis for twenty years. Maybe it's mostly one-sided in that we have never actually met, but, I know that he is really talking to me when he tells that skinny bitch Madeline Stowe that he "will find her, no matter what occurs".  I'm still waiting.  In any case I will settle for his ridiculously hot Mohican brother. 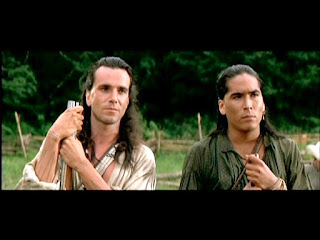 5)  I have way, way too many cats.  There are people who will say that you can never have too many and they would be liars.  Ten is too many.  I had a (crazy cat) lady tell me that having three litter boxes that I cleaned twice a day was not enough.  She suggested that I have one litter box for each cat.  I almost politely suggested that she go fuck herself, instead, I told her that my cats already have more facilities than my family does, having one bathroom for the five of us, and if I cleaned them any more often I would have to kill myself.  There is only so much litter I can touch in one day.  And can you imagine having 10 litter boxes?  I'd need a special room for all of them.  And let me tell you, if I ever have an extra room, it will not be taken up by cat shit.