Eulogy Part Two or 2013 is a Bad Year for Grandmas

When I think of my maternal grandmother, a virtual storm of images, sounds, tastes and smells hits my brain.

I see a blue and white beach umbrella.

I see and smell a wet dock, salt air and sand.

I taste the moistest and most delicious and gluten filled crumb cake that there ever has been.  And noodle salad that no one has been able to come close to making; though my mom is getting there.

If you asked what the secret ingredient was in virtually all of her recipes, the answer would most likely be "sugar" and lots of it.  This probably explains my addiction to all things sweet and plays a role in why I am (only just slightly) above my target weight.

My grandmother was a strong alto in the church choir; she never possessed the most melodious voice in the bunch (that job is for the sopranos), but it was always full of depth and belief that made the hymns come to life. I loved to hear her sing.

I also loved to hear her yell "BUUUTCH!!!" to my grandfather when he was out tinkering in the garage or in the basement.  I never asked her why she called him that, as his name was Charles Howard and he had plenty of other nicknames.  I think she was the only one who called him that.

When I told my grandmother that I was going to name my unborn middle son, Charles after her Butch, she was happy.  When we found out later on that he would be born with Down syndrome, part of me was a little worried that she wouldn't want him to have his great-grandfather's name.  ( I can't imagine thinking this now, fourteen years later ).  When I told her of Charles' in utero diagnosis, she responded with a story of her good family friend (Uncle Jerry) whom I loved and thought the world of and his brother who had had Down syndrome.  She got emotional talking about him and said how loved he had been and how when he hugged you "you knew you were hugged".  I didn't have any doubts after that.

A few months after Charles was born, my grandmother and Aunt Marilyn came out to Chicago to meet him and celebrate my oldest son's third birthday.  For five days we ate ice cream cake, played cards and laughed our butts off.  One of my fondest memories is hearing my grandmother and aunt laughing at the sad air mattress in our "guest" room.  It took up almost the whole floor and they had to climb across it to get in or out.  Sometimes, a grandmother shows her love by getting on a plane and flying for two hours even though it terrifies her and by sleeping on a horrible air mattress just so she can visit you.

When I was about seven or eight, I went with her and my grandfather to visit some friends of theirs in Lake Hopatcong.  The grownups were having a good time and I was getting a little bored, so I decided to take a walk to the beach.  Though it was not far, I got turned around (I am famous for my lack of an internal compass)  and lost.  I'm not sure how long it was that I was gone, but it had been daylight when I left and it was dark when I was finally found.  When I was reunited with my grandmother, I was afraid she would be angry.  The look of relief on her face was enough to let me know that I was not in trouble, that she had just been very, very worried.  I didn't know it at the time, but my grandfather's little brother, Francis, drowned in the Ramapo River at the age of five.  I'm sure they were reminded of that day when they were out calling my name.  Sometimes, a grandmother shows her love by hugging you instead of spanking your butt.

It's hard to think of my grandmother without thinking of my grandfather.  He has been gone for twenty one years and I am sure that a day did not go by that he was not her first thought when she woke up and the last thought before she fell asleep.

He was the light of every gathering.  He was the fun and the laughter.  He was all hugs and love.  When he died, a light went out for all of us.

The last time I saw my grandfather, we were sitting on the couch watching Wheel of Fortune in Lanoka Harbor.  I was getting ready to drive back to California after spending the summer in New Jersey.  I knew it would be the last time, because his cancer was back and they were not treating it.  He still got under my old Volvo and rigged up the rattly muffler before I left.  Pop showed love through hugs and jokes and sometimes through repairs.

When I returned less than a month later for his funeral, my grandmother stood outside her front door, keys in hand with her other hand outstretched behind her, waiting...

She looked at me after a second and said "I was waiting for Pop to take my hand".

I still cry imagining her heartbreak at that moment and every moment that she remembered, again, that he was gone.

I talked with my Gram a lot in the days after my Pops death.  I remember saying "Don't take this wrong, but, Pop was my favorite".  She responded with:  "He was everyone's favorite".  Yes, I was a jerk when I was 22.  She wasn't insulted, I don't think, not really, anyway.  She knew exactly what I meant.

I realize now, that he had it easier than her.  She was the disciplinarian and the one who made sure everyone was fed and clean and on time. Being in that position in my house has given me new respect and more love for the "tough one" in the household.  It's not easy to be overshadowed by "the fun one", but it is often necessary.  We can't all be the fun one; nothing would ever get done!

The last time I saw my grandmother, just a few days ago, she was not the person I am remembering, here.  She was forgetful, asking the same question three or four times.  Her voice was weak and quiet, where it had always been loud and strong.  I talked to her and sat with her a little bit.  She said her arm was itchy, so I rubbed some cream on it for her.  I could not get over how thin her once plump arm was.  I jokingly said "Man, Gram, your arms are so skinny!" and she smiled and kind of laughed.  Years ago, she would have been thrilled for skinny arms.  We both understood this.

The last thing I said to her was "Bye, Gram.  I love you!" and I blew her a kiss out the door.  She responded with a wave and a quiet "I love you".

I will miss her terribly.  She was the bedrock that so much of my life was built on.  So strong and seemingly, permanent.  How is it that in the end, she really wasn't?  That she too would eventually die?  What does family even mean without her?  As a family, we will go on, but with her passing goes another generation.  Some call it the "Greatest Generation".  I called them Grams and Gramps and Gram and Pop and the greatest grandparents a child could hope for.

I can only smile and laugh at the memories and be happy that my Pop won't keep her waiting with her hand outstretched ever again.

The glasses, Gram, Pop and Me. 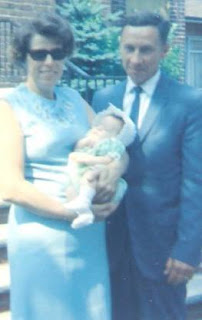