What is not great is trekking to three different stores to purchase:

a 25 pound bag of ice
a bottle of Mai Tai mix
and
two lounge chairs.

But, Hey!  It's a beach day, so WHOOO!  Once that is all sorted out, it's sun, sand, trashy novels and good times until the kids get off the bus.

We pull up at the notsogreat beach because the totallybeautifulandawesome beach is too far away when we only have a couple of hours.

We lug the (extraordinarily heavy)
beach chairs
bag of ice
Mai Tai mix
Towels, books and other crap
down the (ridiculously long) path to the beach.

First though, we read the sign that says:
"the beach is only open on weekends after August 10th".

But, that can't mean anything, right?  I mean, how do you close a beach?  It's a beach for godsakes, not a shoe store.

So, sweating and cursing, we pass the filled park and playground (What kind of weirdos hang out with their toddlers at the park when it is 88 degrees out?)  Why aren't they in the water?  Stupid jerks.

I see the sign and closed gate and in my brain, I know what it says but, my heart won't believe it until I've gotten two feet away and can read it in full view of these dillhole moms.

Here is the part where for the second time in the matter of an hour, I scream in public.  The first time, was in the Home Depot parking lot at some totally oblivious plumbers who decided that parking their van crooked, a foot from my driver door, when there were 347 other spaces they could have parked in, was a great idea.

How do you close a whole lake?  I mean, really?  Who decided that only rich people, who can afford docks across the street from their lovely houses get access?  Who decided that the rest of us losers only get to swim between May 25th and August 10th?  Oh, and only at the crappy beach that they've deigned to let us use?!?

When you start screaming about the haves and the have nots in the parking lot, it pretty much means that beach day is ruined.

Posted by Amy JD Hernandez at 2:37 PM No comments:

I updated my Facebook status this morning ( as I do most mornings ) and this is what I wrote:

Hey Annoying Neighbor! The chances of you being discovered and given a recording contract while twanging on your front porch are about a zillion to one. The chances of me coming over there and smashing your guitar Pete Townshend style? Getting better every day.

It got a few likes and a few comments.  Another neighbor agreed that this guy was among the most irritating people on the planet.

So, I began to think about why this guy bugged me so much and what it meant for me as a wannabe good and kind and peaceful person to write this about him.

You know that saying "if you have to ask you already know the answer"?  Yeah.  Well, I do.  Making fun of this guy makes me no better than him.

Sure, he drives me nuts.  When he's not twanging out of tune on his front porch, he's yelling (yelling is his communication style of choice) at his kids or weed whacking.  These seem to be his only hobbies; except in winter when it is yelling and snow blowing.

I am aggravated that my dear husband (who is so much nicer and more tolerant than me) cannot even be in the front yard when this guy is out there, or he will get caught up listening to him for an hour or more.  There is no give and take with this guy; just "here is a laundry list of my problems and some anecdotes that I will blather on and on about until you literally turn your back and walk away from me".  Sometimes, even walking away is not good enough to deter him.  He is the human version of a remora.  Or the animal version of a burr.  He is very hard to shake off.

There is also the fact that he is milking the system for an injury sustained on the job, when he is clearly not injured anymore.

And then, he complains about the "system".  And I just go ballistic.

So, what does it mean if I can't be nice to this guy?  Am I a bully?  I kind of feel like one.  The more I think about it, the more I see that he is just a little bit off center; not quite in the range of what one would think of as "typical".  Maybe he's got a diagnosis, but probably not.  I'll bet he did poorly in school, though.  I'll also bet that the silly, attention seeking stunts he pulls (like yelling so we can all hear him and playing tuneless ballads to the neighborhood) are holdouts from his childhood.  Maybe he was the kid that tagged along but never fit in.  Maybe he wasn't invited to play.

Then, I feel sad for him because I know that feeling.  And though I certainly don't think my kids are (by a long, longshot) annoying, they do have some trouble socializing and making and keeping friends.

I'm not sure that I could ever be friends with this guy, but I need to look at myself when I plead with the world for tolerance and acceptance for my children and anyone who doesn't fit the neurotypical mold.

Maybe I need to give this guy a break before I expect one for my kid.

Maybe I'll be a better person if I take a moment to put myself in his shoes.

when I have writer's block, it helps me to reread things I have written.  And re-posting them fattens my blog.  So sue me.  :)  This is my birthday post from 2010.

Forty. It's here. Officially, I still have a few hours, as I don't turn the BIG 4 - 0 until 6:30 p.m., Eastern time.
Some people (mostly women) say that "Life begins at Forty". Probably because by the time forty comes around, if they have children, they are in school full time and maybe one of them is old enough to sit for the others once in a while. They feel like they can have a life again.
But, if life begins at forty, what was I doing before? I'm pretty sure I was alive when I was trekking through tiny Swiss villages, drinking beer in Germany, swimming in the Mediterranean and gazing at the baking California desert. I was alive during Midsummer on the top of the world in Finland, where the sun never set.
I know I was alive when I crossed the finish line at the Chicago Marathon, though I felt like I wanted to die.
I've lived long enough to see my children grow from squalling, pooping and sleeping bits of protoplasm into the funny, quirky and beautiful boys they are today.
I've lived long enough to love and lose and love and lose again. The longer I live, the bigger my love and my loss.
I've laughed and cried; sometimes simultaneously. I hope the next forty years bring more laughter and fewer tears; except for the happy ones...those, I want more of.
A good ( and much younger ) friend of mine kindly pointed out some of the many people who never got to be as old as me: Jimi Hendrix, Kurt Cobain, Janis Joplin...after I smacked him, I remembered all the ones still rocking way past forty: Bruce, Bob Dylan and Paul McCartney to name a few.
It's not over, nor has it just begun. It's just another signpost along the way. "Amy is Forty", it reads; with an arrow pointing only one way; forward. 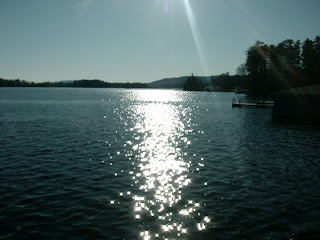 So, a woman sits down next to Charles and me at the beach.  Charles was digging in the sand and making walls and she said " Wow, he's really doing a great job, there!"  I smiled and said something like "uh huh" and she kept going.  "How old is he?" "Fourteen", I answered.

I was already annoyed by fact that she was sitting two feet away from him but addressed her questions to me.  I could see that he was also bothered by her.

Her next question was "What's his name?"  So, I said "Charles, what's your name?".  He didn't answer and his body language was "JUST GET THE HELL AWAY FROM ME, CRAZY WOMAN!"

So, obviously oblivious to Charles' aggravation, she says to me "Does he speak?".

I gave her a look like "Are you freaking kidding me?"  Then, I gave a forced laugh and said that he did.  In my head I was thinking "Yeah, he talks, but not to insane strangers who approach him on the beach!"

At this point, Charles got up and headed for the end of the dock, where he jumped in.  He was clearly done with this idiot.  But, she wasn't.  She watched him jump in and asked me "Can he swim?"

Um, no.  No, he can't swim.  I'm pretty sure the lifeguards will save him, though.  I'm just going to casually observe from fifty yards away.

ARE YOU KIDDING ME PSYCHO LADY?

Otherwise, it was a lovely day.
Posted by Amy JD Hernandez at 5:10 PM No comments:

The Fight Goes On...and On

Garrett Holeve is a role model.  At five feet tall and 140 pounds he is a compact ball of muscle.  He works out hard everyday, putting up crazy push up and pull up numbers, jumping rope and sparring.  Garrett, like many other twenty-three-year-olds, wants to fight Mixed Martial Arts.  Nothing unusual about that.

When we should be applauding (and many are) his efforts, there are a vocal few that find it appalling that a fighter with Down syndrome is even allowed to exist.  Because, aren't they all just sweet, chunky bundles of love?  Barf.

I get not liking MMA.  It's bloody and brutal.  It leads to injuries, some serious.

But, those facts are true for everyone who enters the octagon.

If the fighters have medical clearance, what is the issue?

We are not talking about turn of the century side show attractions, here.  We are talking about men who have worked for months and years, only to be turned away at the last minute.  Literally, the State of Florida stepped in five minutes before last weekend's bout, which Garrett and his opponent had trained hours a day for weeks for.
http://www.winknews.com/Local-Florida/2013-08-05/State-stops-controversial-MMA-fight#.UgGDv5KThVJ

That is just cruel.

Gumbel says that these fighters might not understand the long term risks.  As if their loved ones didn't talk to them about what those might be.

And from another angle, do high school or college football players fully appreciate what the long term effect might be from years of cracking helmets with their opponents?  Maybe, but most likely not.

And Gumbel and the other naysayers don't get that this is not meant to be a freak show.  If he sees it that way, that is his problem and he needs to do some soul searching about it.  It is merely about a man who has a dream and that dream is being squashed out of prejudice masquerading as concern.

Garrett is not a pitbull at the mercy of cruel handlers.  Garrett is a full participant in his own life.  And he wants to be a fighter.  Who are we to say no?

If Gumbel is truly concerned about the welfare of people with disabilities, maybe he should help to expose the horrific conditions that people with Down syndrome and cerebral palsy live in today, right now, around the world.

Don't pick on Garrett Holeve and David Steffin in the name of outrage.  Pick on those that don't see these men as capable of making their own choices.

Check out Garrett's ESPN feature here:  http://www.garrettsfight.org/ and judge for yourself.

Posted by Amy JD Hernandez at 5:34 PM No comments: